Politeness around food, not taking it just because the opportunity arises, is an acquired skill for many dogs.

Learning that “Take it!”  and “Leave it!” are pre-requisites before accepting food from anyone is an acquired skill.

Learning that we are not in the land of “the quick and the hungry”.

This can be an understandable challenge for a rescue dog who has been a stray having to live off scraps and horse poop. When they arrive in our homes food may have been a high-value resource, literally a matter of life and death.

In many instances we might even assume that is the case. The truth is food sensitivity and reactivity is very common and may just be a carry over from a mis-spent childhood with no appropriate education!

Buster is very food motivated and also a bit pushy as is normal for most young dogs of almost any breed.

Buster learns and practices a settled down stay at an outdoor cafe. with food, people and dogs as distractions.

He will try to steal food off the counters, the table, or the plate. Also apple pie from the spoon on the way to your mouth, treats from the training pouch, steal from your hand when you are training or even grab a rinsed can from the recycling container on the way out the back door!

Really, from anywhere he can find it.

He has sharp little teeth and was not very cautious about how much he used them. He “warned” off other dogs from approaching when we were working with food.

As an opportunist and a puppy this is perfectly normal.

A good example of how “normal” behavior is completely unacceptable behavior in an adult and how valuable a good education can be.

To start off with we worked with stuffed toys and some adult dog education in the yard. He tried to steal the toys a couple of times, then over a period of an hour or so acquired some manners with toys.

Wendy is parenting Buster, his manners are improving dramatically and he restrains himself here as Wendy deliberately looks away.

Then I incorporated something a little higher value. In this instance a reindeer antler chew toy. This has some challenges for Buster and he was told off. Then the light came on and he was a little more devious, he tried chewing a stick right by Toto to tempt him to leave the antler but that did not work. However what he learnt in a single afternoon was that he was not the lord of all he surveyed. 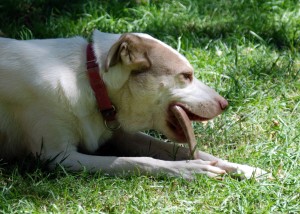 Buster was interested in stealing the Antler but learned that Toto was not going to let that happen. Dogs learn so much from interactions with other dogs but the criterion is that you have to know how the other dogs will react when confronted by another dogs lack of skill. Stay clear of the dog park!

This can be a huge issue in a family home with young children and their friends and something that he needs to learn some manners. A nipped finger, a lost ice-cream and the lightly exaggerated stories making their way around the neighborhood can create an environment where other kids stop coming around the house.

For more serious bites, here in California, that is any nip that breaks the skin, even only one layer on the surface, becomes a liability issue threatening lawsuits, loss of insurance coverage and the “dangerous dog” label.

Just a dog being a dog? Well this is a great opportunity to build the long term relationship that we discuss at some length. We want to be the fountain of all good things, however it will depend on the appropriate behavior from Buster.

Here are some video clips from Buster’s training. Notice that the behavior we are marking is “Leave It!”. At first this is the result of a serious growl and slight lean forward from me. He does not know the command yet, although at first glance you might think so. My body language and posture is very predatorial and easily understood by Buster. A survival cue. I can praise and reward his behavior so that he clearly understands what is being rewarded. On appropriate performance and very quickly I can normally soften the voice tone so that it is the spoken word that cues the behavior not the intimidation in the body language. This is important in order to transfer the behavior to the family environment. Setting Buster up for success.

Success is defined for Buster, and rewarded, when he switches off his fixation with the food. The attitude will change, so he needs to withdraw his forward lean, turn his head and look away from the food (to start with just away will suffice) as he advances in his training I want him looking directly at me, getting strong eye contact and waiting for permission. The “Take It!” command.  We are using training treats here at first, we will change the bait around so that he is able to generalize the behavior and does not assume this only applies to kibble. Think about the fresh roast Turkey on the counter for Thanksgiving.